May you introduce ZANPANZAR to Rock Hard Greece readers? Tell us about the band and how it started.
”Down in the catacombs, beneath mortal ashes ov the blackened altars and in the name ov all transsaturnian demiurges, the cult ov the sunwinds ZANPANZAR was chartered between 2015 and 2017 under the name WARSUN – due to cosmic timeshifts sinsyne and equivocal scriptures, it is impossible to tell an exact date ov happening. After having played in Death Metal bands for several years previously, the idea was to take my musical and artistic work to the next level and unleash a more spiritually related connection I have been feeling for a long time. Therefore I decided to channel all musical and personal influences for raising an occult order, dedicated to the saga ov the incandescent shadows and my own interpretation ov a genre I have been listening to for over half ov my life – BLACK METAL. The idea was to form the band as an order inspired by chaos-gnosticism and working with ritualistic principles, as well as the necessary aesthetics on stage. An actually ideological aspect can be gathered from our order manifesto, which is attached to our demotape URGEWALT. Except for myself, no brethren from the very first line-up are left in the cult and like a curse, this vicissitude has been present until today. Humanoids come and go – which causes delay in the plans ov the ambitious – but this has never hindered me from keeping up what I got into my mind or ZANPANZAR itself. Finding the right, irreplaceable and authentic personnel anyway takes time and a lot ov experience with people. After a longer time ov working together with our drummer and keyboarder ANTISOZIAL (amongst others known for his works with AURORA DISEASE and PIANO IN PAIN) for the progress ov the order, he can be set on par with me and became elementary. Our motivation and effort is the same, no matter if it is about rehearsing for 6 hours straight on a regular base (even at times ov the order being perpetuated by us two only), the aesthetic mindset or finalizing recordings until they sound the way they’re supposed to sound like. From that period ov time on, the cult has changed in its general character. By that it needed a new, more conspiring and metaphysical name. Also, apart from the fact that the most material so far was composed all by myself and it is important that any serious project needs the power ov a ”draft horse“, I also appreciate influence and ideas by other artists I work together with – but only material that sounds great and fitting enough to the musical end product will be realized (a point I am very strict and selective with). This is what working in the form ov a band is about and at the same time the difference to one-man-projects surrounded by session-musicians. However, ANTISOZIAL and I are ov the opinion that producing literally good music is everything else but easy and we do not think a great deal ov methods such as recording every idea that came up or even was noted down. If I for example write 10 songs, I most likely will scratch 9 ov them instead ov introducing them as well. The opposite leads to a behavior ov simply waving through any created material to a release, no matter if it might become a mediocre filler-track. In my opinion there are a lot ov artists with releases consisting ov fillers only, so that you barely can remember anything impressive (a certain atmosphere, melodies, riffs, rhythms, vocals) after listening through an album for example. This especially is a problem with younger musicians from local scenes (I hate that word), where apparently every second John Doe feels predestined for the art ov making music and not rarely loses motivation again quickly, even before having done anything properly and no matter if any producing has been overly announced before. That’s a pity to today’s era ov music itself and exactly what ZANPANZAR strictly wants to avoid with the own music and producing.“

What does the name of the band mean?
“... Perhaps the question I get asked the most. ZANPANZAR is a subliminal code the order received for giving a name to the power charging us with disseminating the disastrous fate ov planet earth. A metaphoric reference to “Zanpantzar” from the Basque mythology, which is a grotesque figure getting burned for every negativity and happened misdoing? Who knows ...”

Which are your main influences in musical level?
“Speaking for my part, on the musical level I am working with influences from nearly all genres and artists I had discovered in my life so far that gave me a certain something at listening. On the other hand it’s always important for me to pick up a few realizable influences I collected from other artists I am working or had worked with here and there – in ZANPANZAR and other projects – because musical development can not only be based on past in my opinion (What’s the point in just exactly reproducing something that already existed 30-40 years ago in a better form for all the time? Keyword “inauthenticity”). For clearly referring to genres and artists, I can definitely name traditional Rock and Dark Wave music from the 80s as one ov the biggest aspects. Steve Stevens’ incredible guitar job on the first few Billy Idol albums significantly formed my style ov playing and can definitely be recognized in clean guitars written for ZANPANZAR. Other noteworthy works are “Pornography” by The Cure and “Shout At The Devil” by Mötley Crüe. Going for Metal influences, we can clearly talk about the more atmospherical Black Metal bands such as Hypothermia, In The Woods... and Zuriaake. But at the same time ZANPANZAR also works with traditional influences from bands like Arckanum or (Black/Thrash-orientated) Desaster. And as I headed to jazzy/progressive and 90s-Gothenburg-style influenced types ov playing back in my Death Metal days, those aspects definitely also find their echoes in music written for ZANPANZAR.  Besides the musical components, I find inspiration in chaos and spiritual mythology, nature, ancient buildings, castle ruins, dead ships and in general abandoned spots. Not rarely I move back to places like that for writing lyrics or just breathing in new ideas.

You describe your music style as avant-garde black metal, but personally speaking I found it more traditional rather than avant-garde. Which are thoughts about this?
“Our demotape URGEWALT is just a very small peak ov all material written and played live. As we still identify with the roots ov traditional Black Metal (while denying neoterically caused identifications soaked by a mental zeitgeist such as “Post-Black Metal”), we spontaneously decided to first drop a demo while already working on the recordings ov the debut album because we already knew that this one will take more time. A simple demo with two ov our rawer songs and two keyboard-tracks, uncomplicatedly recorded with a dictaphone in a traditional manner at the rehearsal room – straightly the way any tone left the speakers. Despite many listener- and label requests for a CD release, we kept it on the self-made tape version only. A classical Black Metal method. I think everyone will first become aware ov the term “avant-garde” related to us once our debut album and further material is released.” 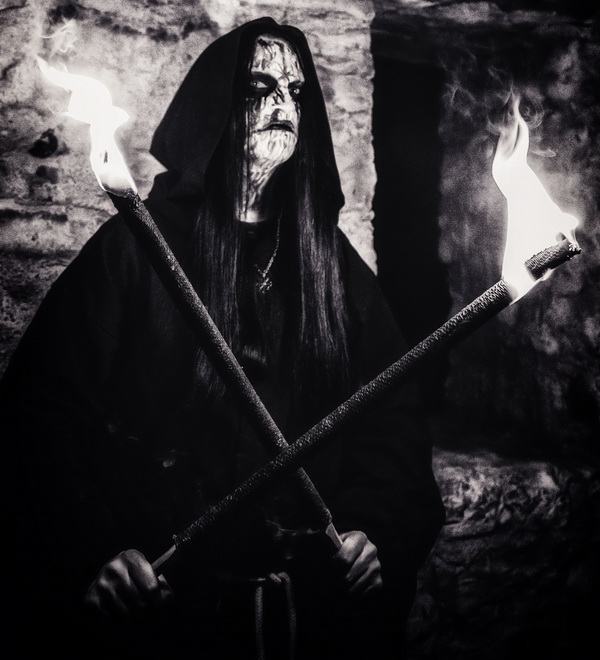 I like a lot the outro of your demo, “Ausklang”. It is just like listening to the soundtrack of a horror movie.
“It is great to hear that our music gets perceived the way it was meant to. All kudos to ANTISOZIAL at this point, as he is responsible for the ambient-parts on URGEWALT and a hell ov a multi-instrumentalist that contributes a lot to the possibilities ov ZANPANZAR.”

You are working on your debut album. What should we expect from you? Have you already set a release date?
“Expect a shock. On the debut album the traditional-only style from URGEWALT will be expanded to music with the named influences (without enforcing to sound “individual by hook or by crook”), that will show an entirely different side ov us to those who didn’t get to hear the material live already – and at the same time that kind ov music, ZANPANZAR originally was supposed to sound like when I wrote the songs years ago. Currently all guitars and drums are recorded already but we now got another delay because a few weeks ago OSMION left the band and therefore won’t record the bass tracks for the album. For this job we rapidly found replacement in JÖRMUNDGAND from Italy, who I got to know as the bass player when I recorded my guitars for the debut album and following EP ov ILLUM ADORA. We are currently hoping for things to work out that way so we can continue quickly with keys, strings and vocals before everything can run through the mixing/mastering and get sent to a label. So it is definitely not possible to set a clear release date yet but we are planning to have the final and pressible material ready around autumn 2020. From then on it will only be a question ov time a label we chose needs for the physical release itself.”

Which are the plans of ZANPANZAR for the future?
“Besides working on our debut album, we are currently busy with working out a cover song for the TIAMAT tribute sampler ov ANTICHRIST MAGAZINE and recruiting the missing positions for a stable and reliable live- and recording line-up in Germany – about who is to be considered and who is chosen already we will remain silent at first. In the next step we want to speed up our working processes and not rest before recording and releasing further material I have already written and am writing on with ambition. Also we will formulate an intenser stage design and a more obscene performance (obviously including our female stage models), to then mainly look for live shows away from the area we live in and especially abroad. Also collaborations with my other band UNHOLY WAR and other familiar bands/projects may not be unlikely.” 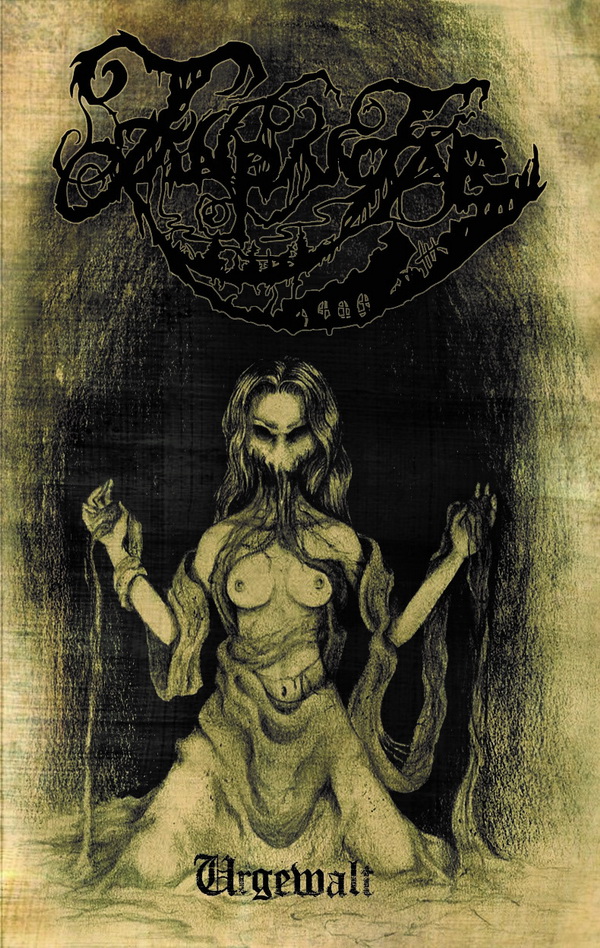 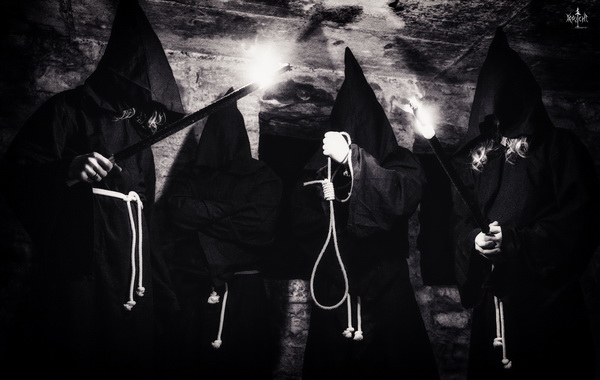 Somewhere Back in Time